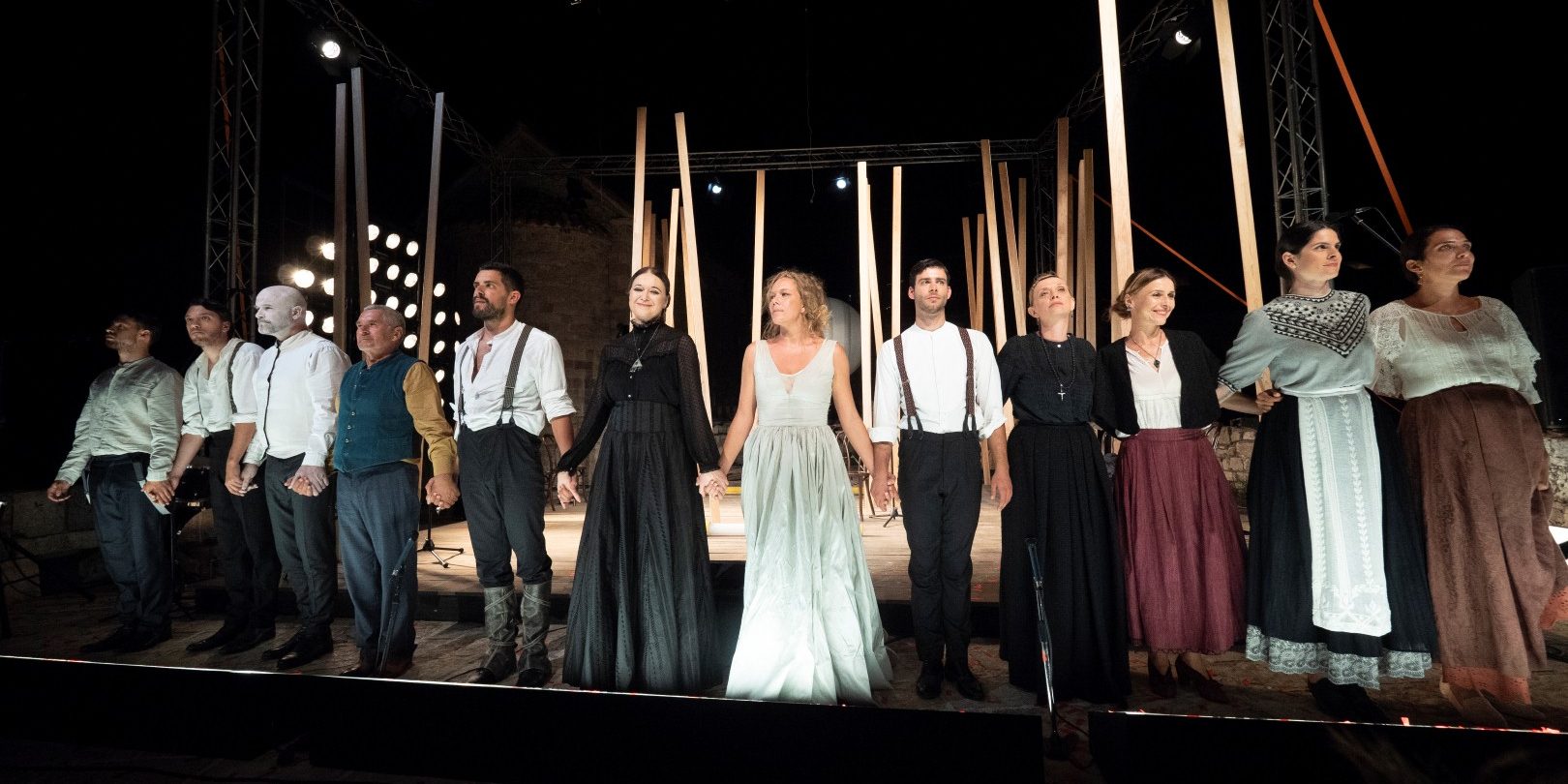 Last night, on the stage Between the Churches, one of the most prestigious festivals in the region, the 35th Budva Theatre City International Festival, was opened with the play “Blood Wedding” by Federico García  Lorca. The play was directed by Igor Vuk Torbica and co-produced by the Budva Theatre City and the Serbian National Theatre in Novi Sad.

The opening ceremony of this year’s festival took place before the beginning of the play. The festival motto of this year is “Revival”.

Welcoming the audience and the guests, the managing director of the Public Institution “Theatre City” Milena Lubarda Marojević said that last year everything seemed to be conspired against the “Theatre City”. From the epidemic, to the monstrous aspiration to stop the festival at any cost for the sake of politics and for the sake of someone’s destructive instincts. “Fortunately, those plans did not materialize,” said Lubarda Marojević.

In addition to that, as she said, the director Igor Vuk Torbica, a person who became more than another  name among the directors at the “Theatre City” festival, left us. “He became our companion in a joint mission, a respectable supporting figure in the world of art, someone from whom we learned every day,” said Lubarda Marojević. Due to all that, this opening ceremony, as well as the days at the very beginning of the 35th  festival “Theatre City” are dedicated to Igor Vuk Torbica.

Thanks to its persistence in high poetic values and its carefully selected programmes, the “Theatre City” festival deserved and officially became a member of the most prestigious European festival family (European Festival Association). It exists in a city that aims to become the European capital of culture. Because of all this, the “Theatre City” must remain a place of the highest values ​​of aesthetics and spirit.

If anyone is still wondering if all this really has so much significance and if all this struggle is worth so much effort, Lubarda Marojević answered with the words of Igor Vuk Torbica: “The power of the theatre is not great, but it is always crucial. It reaches that part of the people who will eventually hold the beam so that the whole roof does not fall on us. ”

Carević: The “Theatre City” will always have the support of the Municipality of Budva

The festival was officially opened by the President of the Municipality of Budva, Marko Carević, who emphasized that the goal and mission of the festival management is for “Theatre City” to remain an important point on the European map of theatre events and to open space for contemporary theatre tendencies in this city. “In that endeavor, it will always have the support of its founder – the Municipality of Budva,” said Carević.

He added that there is no theatre without an audience. “That is why you, who have been on the other side of the stage for three decades, are the most deserving for the duration of this festival. Let’s not forget, the stage is all around us. Political, social, the everyday stage of a simple human being, but this stage is special. It examines the starting points, outlines the goals and the path… Where have we arrived and where should we go? ”Carević pointed out.

“Forty years ago, Budva was ruthlessly destroyed by the forces of nature. The concept of a city – stage, was designed to bring people back to the earthquake-ravaged city. This edition of the festival has the same motif: a revival, human trickery to outwit transience, a desire to play, to laugh, to question and to exist “, said Carević.

A full audience on the stage Between the Churches applauded the play “Blood Wedding”, which premiered at the 32nd “Theatre City” Festival in 2018, and then continued its theatrical life on stages throughout the region.

The premiere performance on the stage of the Serbian National Theatre was also in 2018, and the play was in the regular repertoire during the 2018-2019 season. It was also shown at the 23rd Yugoslav Theatre Festival “Without Translation” in Užice, where Milica Grujičić received the Ardalion Award for Best Actress. At the MIT festival at the Royal Theatre “Zetski dom” in Cetinje, the play “Blood Wedding” was declared the best play. The play was performed in front of the Slovenian audience, at the 26th  “Primorska Summer Festival” in Koper, as well as at the  “Bar’s Chronicle Festival” and at “Tivat Cultural Summer – Purgatorije”. It was played at the 33rd  “Theatre City” festival, as well as at the Montenegrin Theatre Biennale in Podgorica, where Igor Vuk Torbica won the best director award, Varija Đukić won the best female role, and Vladimir Pejković won the best music award.

Numerous recognitions have led to this multi-award-winning play continuing its theatrical life, despite the premature departure of its author, director Igor Vuk Torbica.

He belonged to the younger generation of theatre directors, and in the opinion of many critics and audiences across the region, one of the best, not only in his generation, but also on the entire contemporary theatre scene of the former Yugoslav region.

Actor Pavle Popović said that this play is special for several reasons: “We haven’t played Blood Wedding in two years. Last year, the director of our play comitted suicide, so this playing was special in itself and carried a different emotion. Of course, we tried to avoid everything pathetic, as Igor wouldn’t like to see that, but we did our best to do what he asked of us and to thank him in that way” he pointed out.

Actress Maja Stojanović stated that the whole process was very intense due to all the circumstances.

“We received corrections from other associates who are there to watch us, who simply know what the play was like at the premiere and how it developed later. These are all Igor’s friends, who did not allow us to change anything excessively, even in that emotional sense, but to maintain the measure, because Igor kept insisting that everything should flow like a river and that there mustn’t be anything pathetic. That’s how we cried that part of ourselves so intimately, and tonight we tried to respect all the tasks he gave us, “she said.

Actress Milica Grujičić pointed out that everything related to the performance of this play was very emotional.

“We found ourselves, of course, with the memory of Igor who is no longer with us and that is quite difficult. But we are still playing this play that we all made together in great love, and this was like a new premiere, it was quite strange. My heart is simply full and I am happy that we are in this environment again and everything is really magical. I don’t know, there are a lot of emotions “.

The play “Blood Wedding” is also on the programme on Sunday, July 11, starting at 9 pm on the stage Between the Churches.